Thank You so much for the great support during this past weekend, the so called “black friday”.
It’s been so important for us to see how much You love what we do!
We’re talking to You.
Yes, You!
We’d love to hug You all.
Ok, stop now with all this fuss…
Really: THANK YOU

Malleus and the Giclees

You know when, while working on new projects, you come across a lot of images that you have made during your career?
So you sit down and begin to look, browse and search, imagine how you can give back life and luster to so many posters, covers, drawings that are part of a yesterday and that may have sold out in their original format, or perhaps have never been done etc. etc.
Good.
While composing our new site, we realized how many drawings our hands have put on paper, how many colors we have silkscreened in almost twenty years of Malleus.
And we asked ourselves how we could do to revive so many images that have marked our history.
We turned around, we saw our beautiful little printer with which we make the films for our posters and we said to ourselves … with a few difficulties for the pronunciation …: GICLEE!
What is a giclee?
If you search on wikipedia you will find all the necessary info, but in short, a giclée” (from the French gicleur, sprayer) is a fine art print made with a professional inkjet printer using acid free cotton rag papers and canvas.
So, considering we don’t reprint  our old posters, the use of this technique seemed logical to us.
We opened a section on our store and we’ll continue to put more images, little by little.
You will find the first prints, open editions signed and stamped here, in our headquarters in the middle of nowhere, in the little grey city called “Little Cake”.
You can see some examples here below: 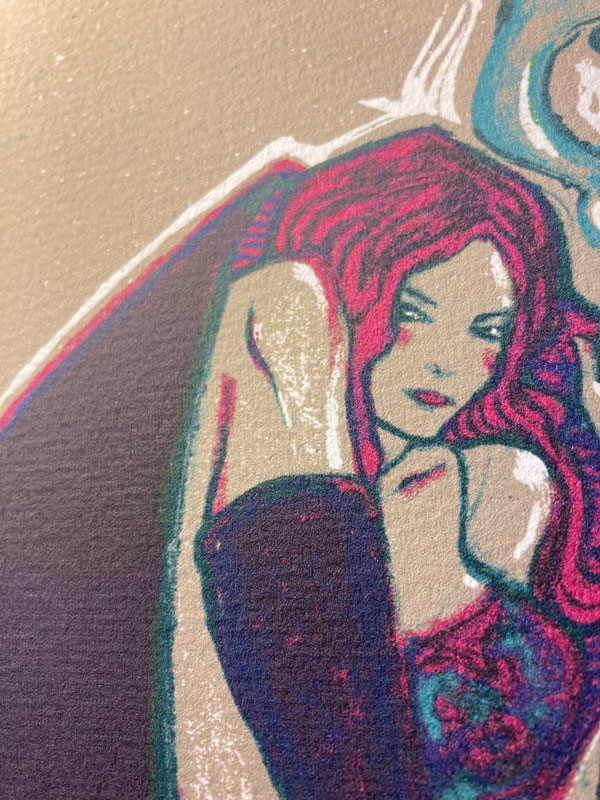 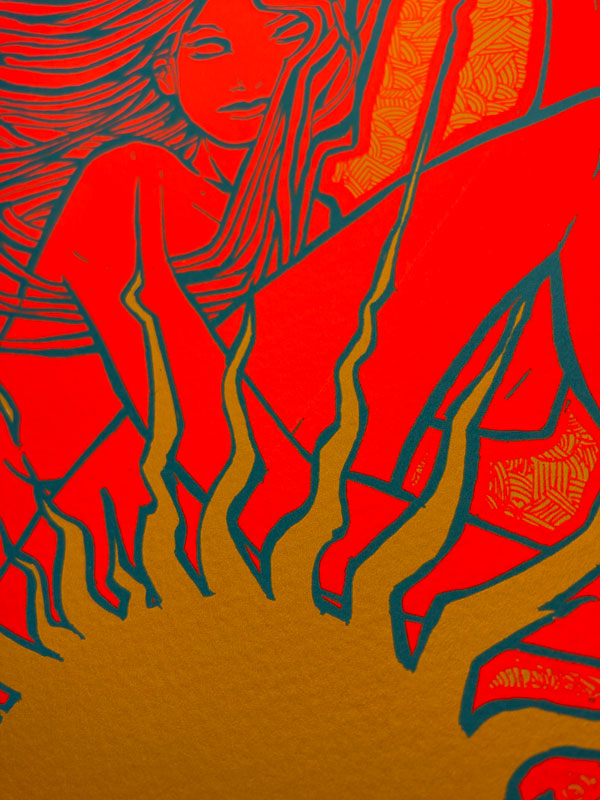 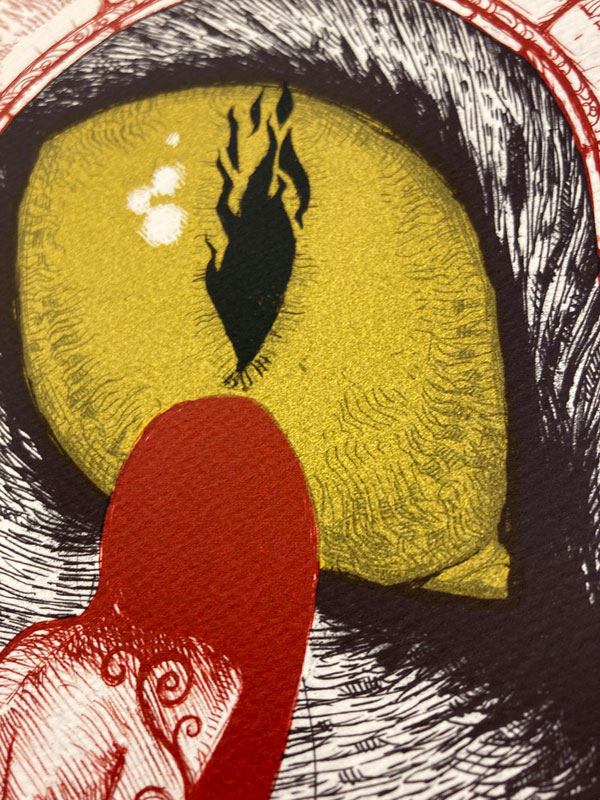 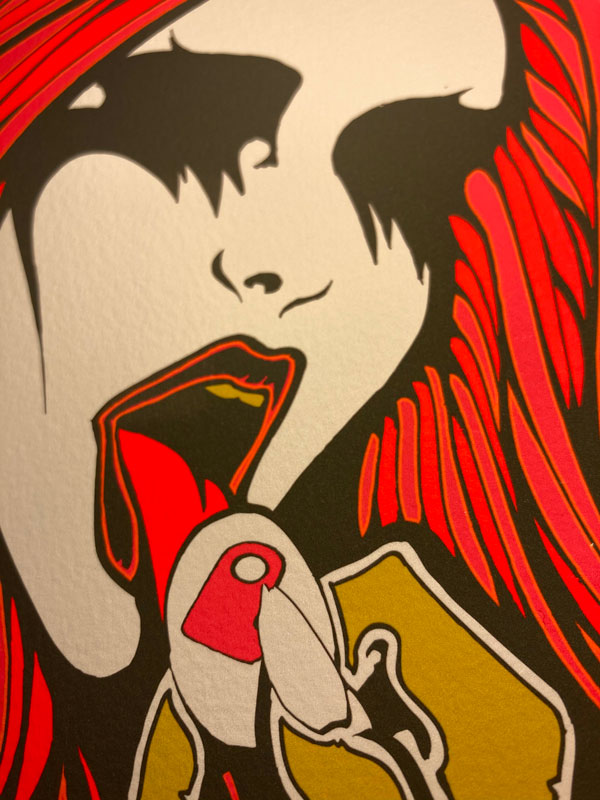 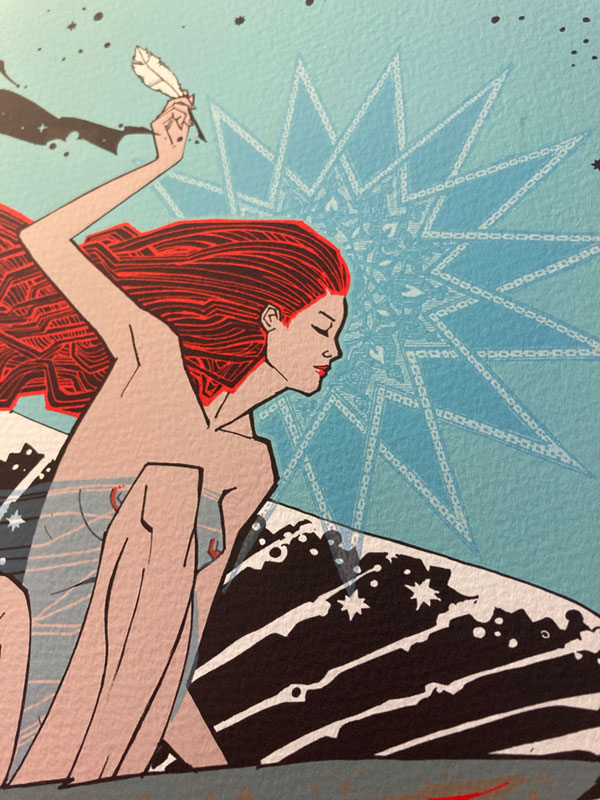 Hope You’ll like the idea and please, feel free to suggest prints You’d like to see!
And ASK US something writing Your questions at ask@malleusdelic.com
Don’t be shy!!!

We have the first question from You and we’re very happy, as promised, to answer You.
Uve asked us what is the process of production, between the original fine art, and the silkscreens?
More specifically, how is the fine art reproduced to make the silkscreens?
The question requires an answer that could be long and  boring.
So, first of all, it seems nice to us to create a preface by inserting the video of the production process of the Mudhoney poster, made for their concert in Berlin in 2013 (good times!)
Enjoy it:

Now it’s time for a proper answer.
Of course, we should say it’s a magic and secret process and we can’t unveil it.
But it’s not…
When we start in working on a silkscreen, a poster, an art print or a painting, everything comes from the idea, which is always the hardest thing to find.
Luckily we’re a three headed entity, so we can brainstorm and think of something that is interesting (or so we guess …)
Then we begin to sketch on paper, to put  the first shapes on a sheet.
Once we’ve found the right path, the pencil drawing is the next step.
And then we move on to inking.
The pencil drawing is scanned and digitized.
Then it is reviewed by hand or with a tablet or an iPad.
Once the drawing is inked, we move on to coloring, already trying to understand how the work will be printed.
Once it’s done and we understand the inks we will use, we’ll move on with color separations and we print the films for the frames.
We use a plotter and then blacklight bulbs to burn the frames and have them ready for silkscreening.
We hand pull our works.
It’s something we’re very proud of.
And that’s why we consider what we do something very far from industrial printing.
We’ve the complete control on our art, we can decide to change things and make them better till the last minute.
So, when the screens are ready, we can put them on our table and start to print with the right ink and squeege.
To give an example… if we have to print 150 copies of a 4 color silkscreen, it means we’ll have to pull 600 times colors on the paper.
Exactly! That’s why we’re so handsome and muscular! ahah
Once the posters are ready, we stamp them on the back, we number and sign them all with a pencil.
And they’re done.
It seems a difficult process, but it’s not.
Every poster has its own story, of course, problems are always there waiting around the corner… but luckily we usually find solutions.

And now… please next question!

It’s a weird period all around the World.
We’re facing a different way of living since March, when the pandemic started and we became slaves of the events.
Here in Italy, since the Roman Empire, we say “anno bisesto, anno funesto” that means “leap year, fatal year”.
And superstition has never been so predicted as for this 2020…
We’re back in lockdown here in Piedmont, the region of Italy where we live.
The last gig we attended was in February, it was Monster Magnet (what a great band and inspiration!!) , after we printed 3 posters for their European tour.
We miss the warmth of the people around, the smell of music, the noise, the lights on a stage, the smoke.
Also the inconvenience of waiting outside a club in the cold, taking the highway and standing in line on a ring road, laughing and drinking a watered down beer watching a band playing is something we miss a lot.
So, when the email from our friends Jerry Joseph and the Jackmormons arrived a few weeks ago, it didn’t seem real to us.
They were telling us they were going to play a couple of intimate gigs in California in early November and they wanted to celebrate with a poster.
We armed ourselves with pencils and paper and started drawing following their directions: a blonde and a brunette women, wine, fire and something that represented the part of California where the band was going to play (Yokayo Ranch, Ukiah).
This is what we came out of it: 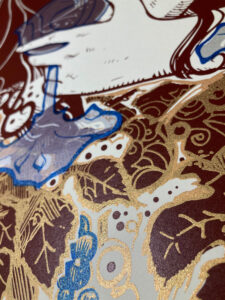 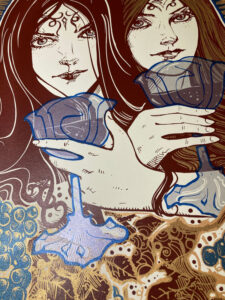 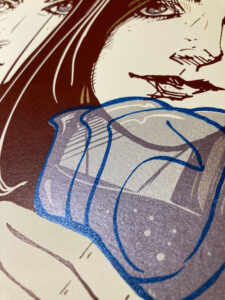 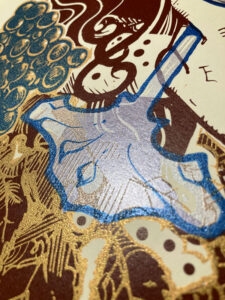 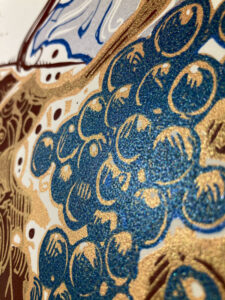 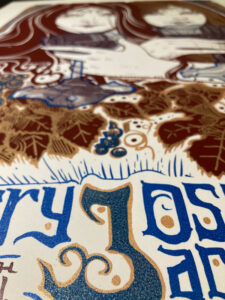 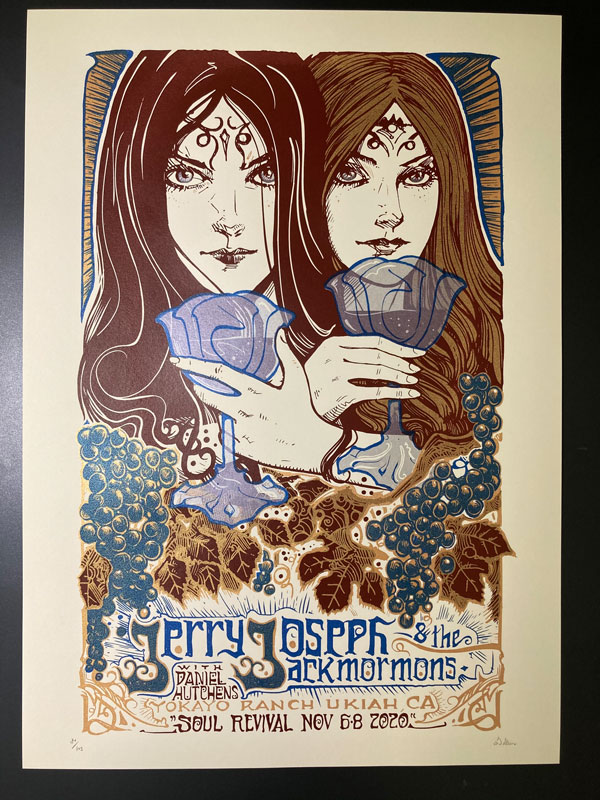 It’s a 4 color silkscreen, limited edition of 103 pieces, printed with 3 metallic inks (blue, gold and silver) and a dark red one on cream paper.
80 prints were on sale during the shows.

Moreover, we worked on an art print version we called “Ambrosia”.
As you probably know, Ambrosia was the drink of the gods.
The two women  then become two deities drinking from floral-shaped goblets, with flames coming out from their eyes.
We used a different coloring and 2 more colors.
So, Ambrosia is a 6 color silkscreen, limited edition of 60 pieces, printed with 4 metallic inks, except for the red of the flames and then a purple glittered ink, on cream paper. 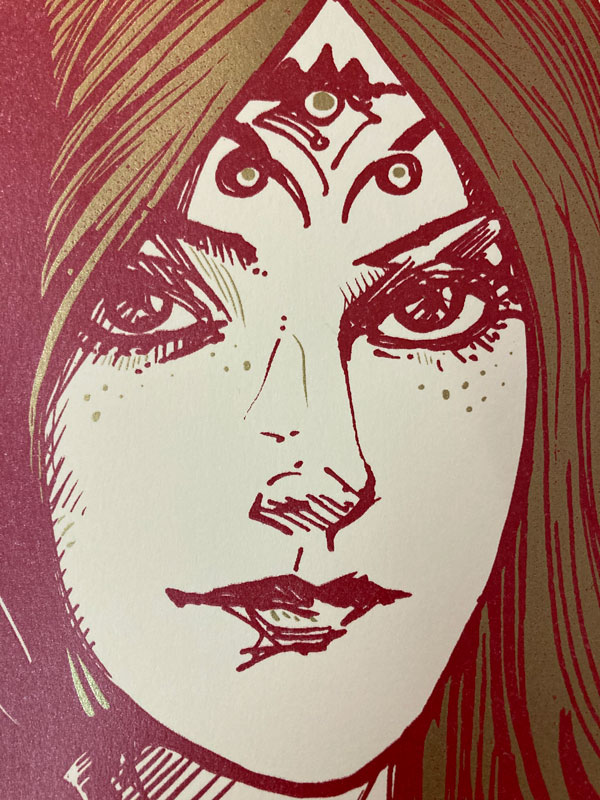 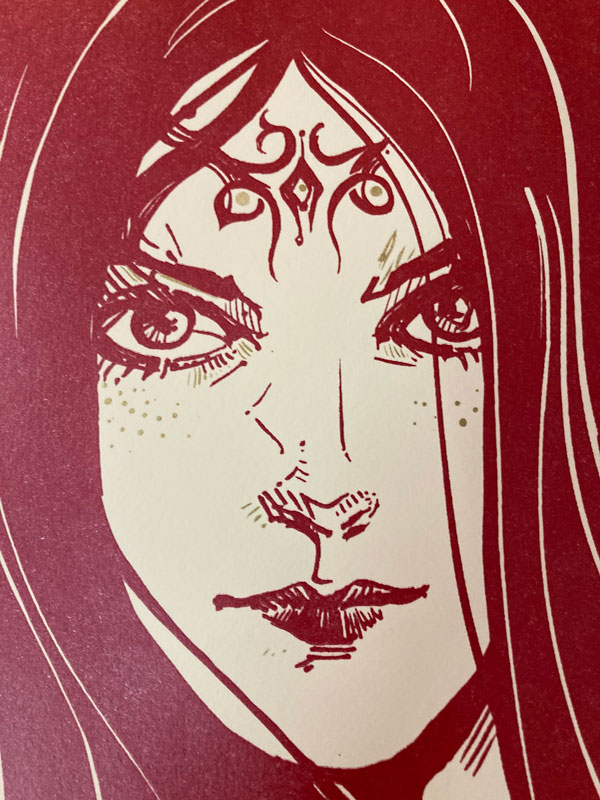 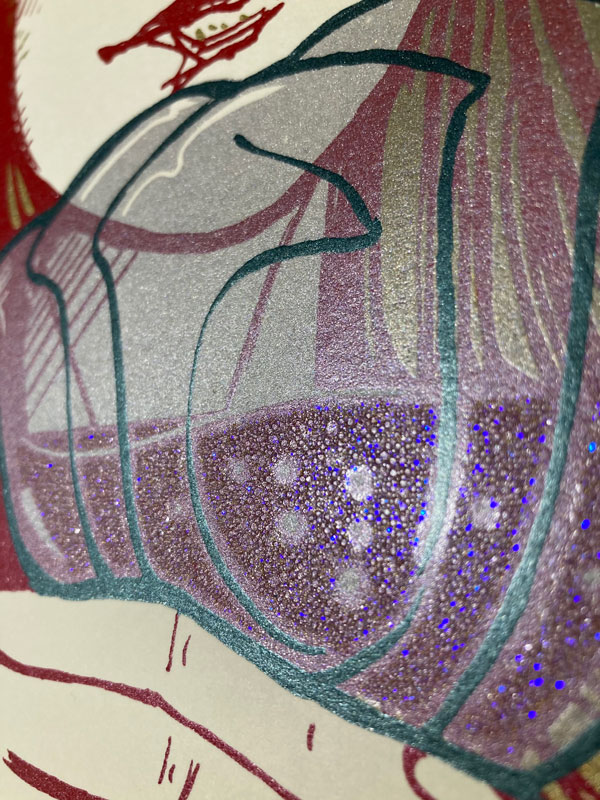 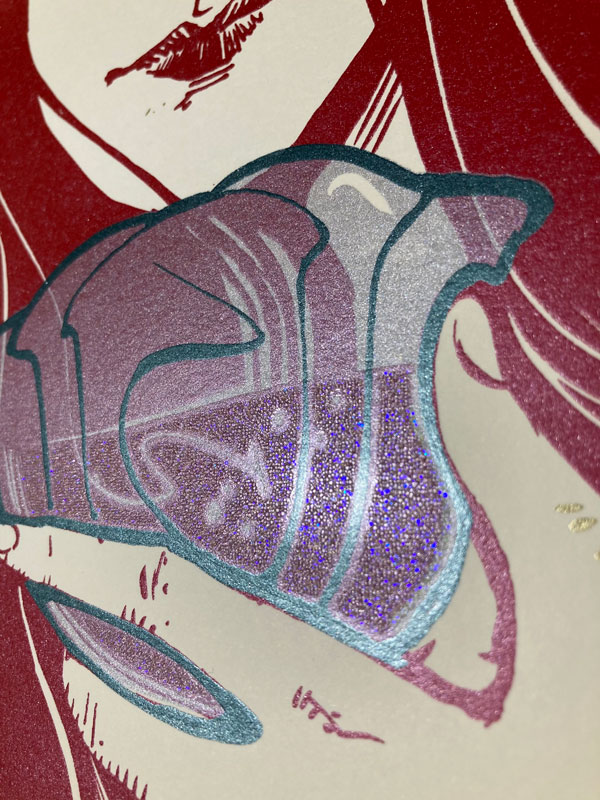 Hope You’ll like these prints.
They’re the first one on the brand new website!
And we’re very very happy with them!
More coming soon!!!

We’re back with a new website.
And also a brand new blog.
I was looking at our previous one we stopped writing in about 4 years ago.
it makes me smile that the last but one post said:
“Finally we’re back on the blog.
I always promise to keep it alive, to write more and blah blah blah… but then time is tyrant and we forget to post everything we do (well… not everything, let’s say… the things we’re working at…) for weeks…
But today, thanks to the sun shining and enlightening our minds… we’re here writing”…
Very good.
Then, another post and then: hibernation…
So this time we will avoid making promises by telling you that since we are in lockdown (again!!!) we will write a lot of stuff … Let’s say we will do our best to be a little more present.
Maybe without exaggerating … we don’t want to get boring.
What we would like to do with this blog is to involve You, play with you, answer your questions, telling You the things you want to know about our posters, our illustrations,  show you things about Malleus that maybe intrigue you from time and you never dared to ask.
No, we won’t tell You what kind of underwear we use or the size of our feet.
Neither why Your order is in delay (the answer is easy: we’re preparing it, or we’re just 3 and time is what it is, or the courier messed with it, or please be patient it’s arriving soon… these are all the polite answers we got…ahah)
But we’ll be happy to answer questions about what we do.
So, just drop us an email to ask@malleusdelic.com and we’ll answer You here.
In the meantime, enjoy the new website, use the discount codes we’ve prepared for You (subscribing to the newsletter), tell us if You like it, if there’s something missing, what about the apparel, what about the paintings, the posters, the records (we run a small record label… yes, it’s called Supernatural Cat), the art prints, everything.
Leave us a feedback, positive or negative.
It will help us grow anyway.
And last, but not least: STAY SAFE.
————————————————-